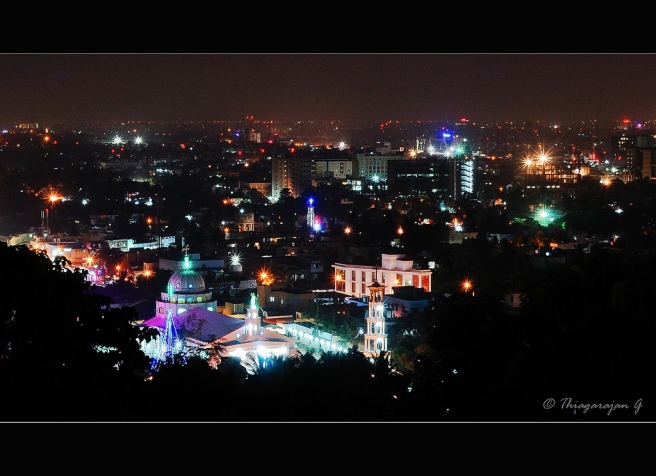 For many years now I have been living in St. Thomas Mount area in Chennai, S.India. Known in modern Tamil as Parangimalai, this small hillock of about 60m (196.9 ft) above sea level, very close to the Chennai International & Domestic Airports, has been the site of the Apostle Thomas’ martyrdom and is, therefore, one of the famous tourist destinations of the city along with the Marina Beach. The top of the hill can be reached by means of 135 steps, but there is also a road that reaches around the back of the hill.

For me, climbing the hill by way of the steps has always been an anticipated thrill. When you climb the steps, you slowly rise above the city and a breathtaking panorama starts unfolding before you, bit by bit, step by step. As you climb, people, buildings, traffic, etc., shrink and reduce before your eyes. Finally, you reach the top, step on level ground, take a deep breath and swivel around to enjoy a 360-degree-view of the city. You can see miles around and glimpse the city spreading to the horizon as far as eye can reach – east to the sea (the Bay of Bengal), north to city’s port (built as an artificial harbour) and industrial area beyond, west to the suburbs and south to the airport and beyond.

From that height, much of the ugliness of the city, including its dirt disappears from sight, leaving you awed at the beauty of the view and dumbstruck at the nuances of the vista. At twilight or dusk, a blanket of darkness slowly begins to cover the city and lights begin to twinkle here and there. At nightfall, the whole city landscape looks magical with diamonds of light embedded in a background of black velvet that leaves you gasping for breath at the wonder of it all!

It is fascinating to note how familiar things look so different when seen from another vantage point, with things that seem to loom over you actually shrinking to almost nothing. A high point vision, a wide angle perspective and a panoramic view of life actually help to readjust and realign our perception of how things are or seem to be. Most often we rue our lot in life, our portion on earth and our position in time because we minimise our niceties and maximise our insecurities. All we need is just another look from another viewpoint for things to appear in the right order and right color.

Like it or not we are more like chickens, running to cower under a shelter, than like eagles that eagerly await the storm, bodies quivering with excitement and wings widespread with anticipation! A different outlook will be enough to transform us from chickens scurrying under cover to eagles confronting the storm headfirst! We need a binocular or telescopic sight rather than myopic or microscopic tunnel vision!

However much I want, I can’t stay up there, marveling at how things changed when seen from up there and I regretfully begin my descent down the hill. Once I’ve had my fill of the view, duty calls and climb down the hill, descending the same steps into the world of daily duties and cares. Just as when I went up, in the exact opposite way, the city begins to loom larger and larger, resolving itself into building, streets, people and a million other things. Finally, I am back on ground, walking into the decay and dirt of mundane life, but now armed with something to show for my time up there. The look from the hill usually fills me with an insight that restores and readjusts my vision as well as my outlook of ordinary tasks. A different perspective had birthed a different perception as well as hope!

We don’t get to stay there on that high point or at a different vantage point. We go there to get a whiff of fresh air, a breath of newness and a look at the end of the horizon. We go there so that observation of the vista helps readjust our sights and restore 20/20 vision so we can better handle the commonalities of affairs of life. We come back. not only with healed perception, but also with a hidden gift  as the poet of The Daffodils declares:

… I gazed—and gazed—but little thought
What wealth the show to me had brought:

For oft, when on my couch I lie
In vacant or in pensive mood,
They flash upon that inward eye
Which is the bliss of solitude;
And then my heart with pleasure fills,
And dances with the daffodils (or the hills!).
(William Wordsworth (1815) )

*Photo courtesy of the internet